29.10.2021 • The European Arthouse Cinema Day is only two weeks away! In preparation for the big day on November 14th, we'd like to include the cinemas in our international social media campaign. Have a look at our latest newsletter to find out how. We're looking forward to your participation in one of our social media initiatives to raise awareness for your cinema and the 6th European Arthouse Cinema Day. You have time until November 1! 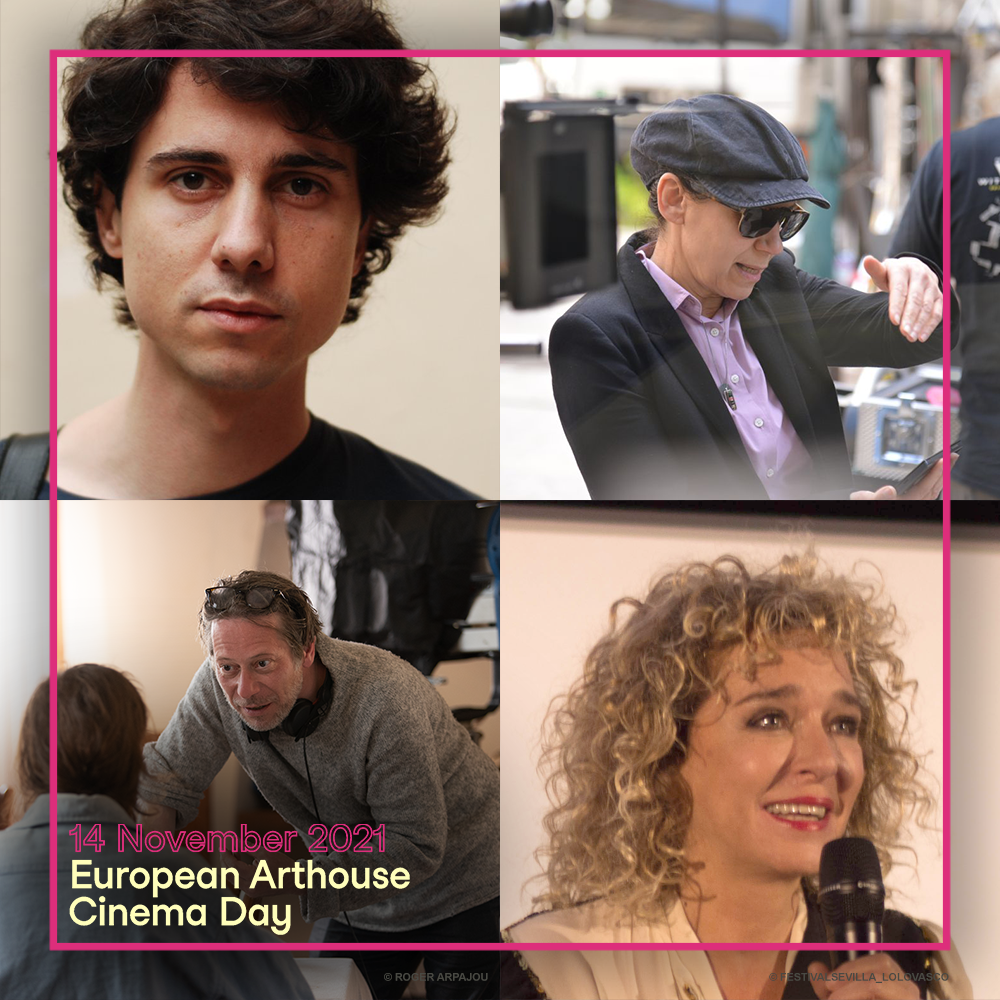 Ildikó Enyedi's first film, My 20th Century, won the Caméra d'Or in 1989 and was named one of the 12 best Hungarian films of all time - and one of the ten best features of the year - by the New York Times. In addition to the more than 40 international awards she has won for her directing work, she has also won awards as a screenwriter. She is a member of the European Film Academy and has been awarded the Béla Balázs Prize and the Merit Prize, and has received the Order of Merit in France.

Mathieu Amalric, born on 25 October 1965 in Neuilly-sur-Seine, is a French actor and director. An eclectic actor in his choices, ranging from French auteur films to American blockbusters, he was awarded the César for Best New Male Actor in 1997 for Comment je me suis disputé... (ma vie sexuelle) by Arnaud Desplechin, then twice the César for Best Actor: in 2005 for Rois et Reine by Arnaud Desplechin and in 2008 for Le Scaphandre et le Papillon by Julian Schnabel. As a director he also received the Prix de la mise en scène at the 2010 Cannes Film Festival for Tournée as well as the Prix Louis-Delluc and the Prix Jean-Vigo in 2017 for Barbara. His latest film, Serre Moi Fort, was released on 8 September in France.

In Valeria Golino's film debut as an actress, she played Ugo Tognazzi's daughter in Joke of Destiny (1983). In 1986, the Venice Film Festival jury awarded her the Best Actress prize for her performance in the romance Storia d'amore (1986). She worked under the direction of Alexandre Arcady for his film Dernier été à Tanger (1987), and Randal Kleiser for Big top Pee-wee (1988). Her breakthrough came in 1988 when she starred alongside Tom Cruise in Rain Man. In the early 1990s, she appeared in the two parts of the parody saga Hot shots! (1991 - 1993). Valeria Golino made her mark in Les Acrobates (1997), L'Albero delle pere (1998) and the Franco-Italian-Turkish co-production Le Dernier harem (1999). Valeria Golino acts in alternating genres: crime thrillers (36 Quai des Orfèvres, 2004), comedy (Olé!, Ca$h) or choral drama (Ma place au soleil, 2007).

Born in Madrid in 1981, Jonás Trueba is the author of the films Todas las canciones hablan de mí (2010), Miniaturas (2011), Los ilusos (2013), Los exiliados románticos (2015) and La reconquista (2016). He co-wrote the films Más pena que Gloria (2000) and Vete de mí (2005), both directed by Víctor García León, and El baile de la Victoria (2009), directed by Fernando Trueba. He is also the author of the book Las illusiones (Editorial Periférica), as well as several writings on cinema in various media. He combines cinema with teaching and since 2013 he has been part of the team of Cine en Curso, a pedagogical project around cinema based on film in educational centres. In 2019 his film La virgen de agosto (Eva in August), received the Fipresci Award at the Karlovy Vary Film Festival. His latest film, Quien lo impida (2021), has just had its World Premiere at the San Sebastián Festival competition where the cast of actors and actresses received the Silver Shell for Best Supporting Performance. 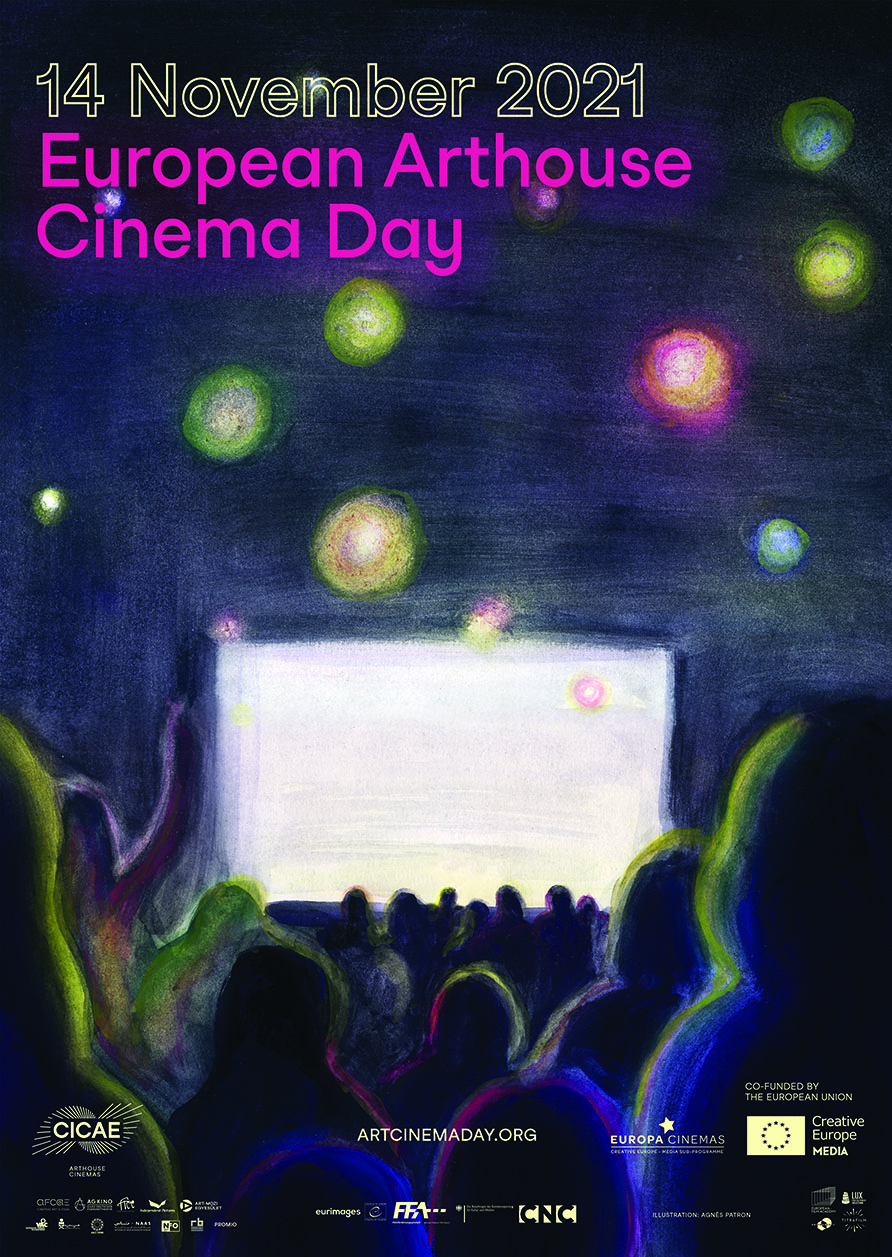 The new artwork is here!

28.09.2021 • We are very excited to finally present the visual for our 6th European Arthouse Cinema Day!

Check out Agnès Patron's beautiful hand-drawn illustration that celebrates the cinema visit as a joyful act of togetherness.

The poster has been adapted to several languages and can be found in the download section on our website as well as an updated social media kit that we encourage you to use for your communication surrounding the European Arthouse Cinema Day on November 14th.

After training in animation at the Ecole Nationale Supérieure des Arts Décoratifs where she made her first two short films in animated painting, LA VALSE DU PENDU and LA VEUVE CAILLOU (selected in Clermont Ferrand, Dresden, Stuttgart, Animafest and Annecy), Agnès Patron worked on the animation of the teaser for Florence Miailhe's feature film LA TRAVERSÉE and on the animated parts of Nadine Buss' documentary D'ORIGINE ALLEMANDE.

She directed her latest short film L'HEURE DE L'OURS, for which part of the CHULYEN team once again lent its pictorial talents. In 2019, the film was selected in Cannes in official competition and received the César 2021 for best short film.

We are very happy to work with Agnès Patron and thank her very much for the collaboration!